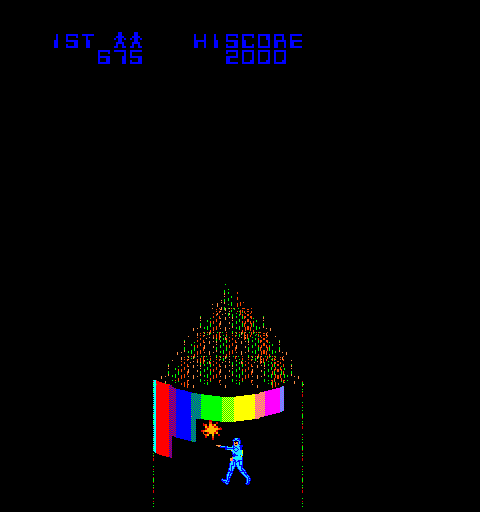 Tron is a coin-operated arcade video game manufactured and distributed by Bally Midway in 1982. It is based on the Walt Disney Productions motion picture Tron released in the same year. The game consists of four subgames inspired by the events of the science fiction film. It features some characters and equipment seen in the film, e.g. the Light Cycles, battle tanks, the Input/Output Tower. The game earned more than the film's initial release. Arcade cabinet Tron was distributed in three types of cabinets: the standard upright, the mini upright and the cocktail (table) version. All cabinets feature an 8-way joystick for moving, with one button for firing or speed control, and a rotary dial for controlling the direction of the fire (a setup also used in Kozmik Krooz'r, another Midway game). The game can be played by one player or by two alternating players as the controls are made for only one player at a time. Gameplay The player in the role of Tron has to beat four subgames, each at 12 increasingly difficult levels, with each level named after a computer programming language, such as "BASIC", "RPG", "COBOL", "FORTRAN", "SNOBOL", "PL1", "PASCAL", "ALGOL", "ASSEMBLY", "OS", "JCL" and "User", (then "User" repeats itself). All four segments of one level must be completed before continuing on to the next level. I/O Tower This segment of the game mimics the scene from the motion picture in which Tron enters the Input/Output tower. In the arcade game, the player must destroy large numbers of Grid Bugs with Tron's disc and clear a path to the flashing circle, which must be entered before a timer runs out to complete the section. If a Bit appears on the screen, it can be picked up for a bonus of 5000 points. MCP Cone This area imitates Tron's final battle against the MCP. The game's interpretation has the player destroying a multicolored wall in front of the MCP cone and getting by the wall, into the cone. A 1000 point bonus is awarded for completing the level, and an additional 1000 points is given for destroying all blocks of the wall. Battle Tanks The Battle Tanks subgame is not strictly based on film events, but the tanks are taken from there and the gameplay is similar to Atari Combat. The gameplay does resembles a two dimensional version of the in-universe game Space Paranoids which itself was realized as a 3-D first person maze shooter but would have been difficult to realize on real world arcade machines of the time. The player must guide Tron's red tank through a maze and destroy several blue tanks or red recognizers controlled by the computer. This must be done without taking any hits from enemies. If the player drives into the purple diamond in the center of the maze, the tank is warped to a random area of the maze. A bug in the game results in a cheat option. When the player's tank is not touching the white line in the corridors, it can not be hit by the enemy's fire, but it can still be rammed by enemy tanks. Light Cycles This game is well known and associated with the Tron franchise. The player must guide a blue Light Cycle in an arena against an opponent, while avoiding the walls and trails (walls of light) left behind by both Light Cycles. The player must maneuver quickly and precisely in order to force opponents to run into walls. The enemy cycles have a fixed behavior pattern for each level: if the player can find it, the opponent can be defeated every time on this level. Recognizers These floating vehicles, colloquially referred to by the public as "stompers" for quite some time, take the place of the tanks at higher levels in the tanks game. The designation "recognizers" was used very sparingly in the film and many viewers might have therefore been unaware of the proper name. In the film, the Recognizers were the vehicles that attempted to stop the light cycles from escaping the game grid by "stomping" on them, and one of these vehicles was also the type of machine that Flynn "resurrected" with his user powers. Recognizers do not fire at the player's tank at all but move at high speed, relentlessly converging on the player's location, and each still requires three shots to be destroyed. Level keywords Each of the 12 difficulty levels has a different keyword. They all relate in some way to computing, and most of them are programming languages. The keywords are, from lowest difficulty to highest: RPG, COBOL, BASIC, FORTRAN, SNOBOL, PL1, PASCAL, ALGOL, ASSEMBLY, OS, JCL, USER.

Based on the 1982 Midway arcade game based off the Disney film, players take control of TRON in four different game grid scenarios:

The Xbox Live version offers competitive or co-op play to go for the highest score, and a mode that features enhanced graphics.

Reviewer: CaptainTightpants - favoritefavoritefavorite - June 1, 2019
Subject: How to Play
For those having difficulty, you need to use the Z and X keys to simulate the spinner. Press the TAB key while in the emulator and the menu that appears includes an option for mapping the keys, which is where you can see how things are set up currently.

Strategies: The key to Tron is that on the tank levels to snipe them from around corners. On the Spider Level to just run to the escape as fast as possible. On the MCP level, kill a zone 2-3 deep before trying to escape.

Control gripes: With Xbox 360 controller, the spinner arm and movement is mapped to one analog controller when it should be on two. Its not playable for me.

3/5 Tron wasn't that good for its time, it doesn't hold up, but it had that awesome movie tie in which kids love.